Detroit Legal News – “Back on Track …”

Posted at 19:56h in Rotter & Stone Press by HuntTech
Share 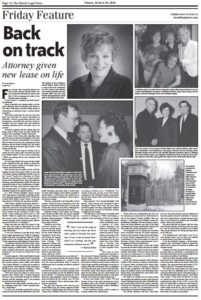 For a woman with a decidedly upbeat outlook on life, attorney Harriet Rotter was at an uncharacteristically low point in the fall of 2014, mourning the death of her longtime legal confidant.

“I was a wreck – a complete and total wreck,” she admitted.

Gone, tragically and unexpectedly, was her legal colleague Marvin Shwedel, who shared a law office with Rotter and died within weeks of contracting an infection from a routine dental procedure.

“We used to joke that he was my ‘day husband’ for more than 35 years,” said Rotter of Shwedel, a former prosecuting attorney who developed a successful law practice based in Franklin. “He was a mentor and a role model for countless attorneys, and he was just a joy to be around.”

As Rotter grappled with the sudden loss, she began steps to close down her busy family law practice when ironically “family” intervened.

Her niece, Nancy Stone, after spending more than 20 years in commercial litigation work with Howard & Howard, coincidentally was making plans to strike out on her own, changing her legal direction into the field of family law. She hoped to find a partner for the new legal venture – and attract one she did.

“Here I was on the verge of retiring and up comes my niece with a plan to become law partners,” Rotter related. “It was a turn of events that I didn’t see coming, but for now retirement will have to wait.”

For how long, Rotter isn’t sure, but the weight of the caseload at the new Rotter & Stone law firm in the quaint village of Franklin says it could be years down the road.

After several years in public service with the Oakland County Prosecutor’s Office in the mid-’70s, Rotter quickly established herself as one of the “go-to” family law attorneys in Metro Detroit, representing a host of high profile clients that included those from the political, business, and entertainment worlds. She has represented the likes of Joey Nederlander, of theater and show biz fame, in his divorce, along with a host of sports stars, TV anchors, and media personalities caught in the marital crossfire.

In a 1994 “Detroit Monthly” feature on the finer legal points of domestic break-ups, Rotter was among the magazine’s list of the “10 Divorce Lawyers You’d Want in Your Corner.” In its capsule summary of Rotter, the magazine said this:

“This former assistant prosecuting attorney – and history and political science teacher – is considered by some to be one of the most influential women in the state (especially in Republican circles). Known for her tendency to talk a blue streak – some colleagues refer to her as ‘The Mouth’ – Rotter is regarded as a caring advocate. She may be more widely known among TV viewers because of her frequent guest appearances on WXYZ-TV’s ‘Company.’”

Rotter said that her legal star began to rise soon after she made an appearance on a talk show featuring well-known TV anchor and newscaster Bill Bonds.

“I was very fortunate to get that break, which led to regular appearances on ‘Kelly & Company,’ another talk show that featured Channel 7’s John Kelly and his wife Marilyn Turner,” said Rotter. “Those appearances really shaped my legal career.

“I remember well that first show when I started talking about women’s issues and the phone started ringing,” recalled Rotter. “The discussion really resonated with women, and it provided the impetus for me to focus on family law in my practice.”

An early supporter of the Equal Rights Amendment, Rotter has been equally adept at representing men and women in divorce cases. Her family law wisdom appears in the widely read treatise “The Detroit Almanac,” in which she is quoted as saying that the “rule of thumb” is that “the divorce should cost no more than the wedding,” a legal nugget that is good as gold for most clients.

“Men have been my clients in many of my biggest cases,” Rotter said. “I started representing more men, principally through my political contacts and the campaign work I was involved in on the local and state levels.”

Whomever the client, Rotter said that some of her colleagues tease that “I don’t represent people, I adopt them.”

As such, she zealously guards their privacy, aiming to keep their marital difficulties out of the public limelight, especially when it would make for tasty media fodder. In fact, Rotter currently is representing a well-known state politician in divorce proceedings, declining to “name names” for privacy reasons.

“Divorce, emotionally and financially, is hard enough without having it splashed across the papers or on television,” Rotter said. “It is my goal to keep the case out of court until a settlement has been reached and it can be put on the record.”

Oakland County Circuit Judge Joan Young, who has known Rotter since she was an assistant prosecuting attorney in the mid-‘70s, said her longtime friend possesses a “brilliant mind” and has turned “practicality” into a legal art form.

“Harriet is one of the smartest women I’ve ever met, and she always strives to do what is best for her client within the boundaries of the law,” said Young, the longest serving judge in Oakland County. “Her approach is always very practical and methodical, and it is only in the rarest of circumstances that her cases play out in court, which is a testament to her skill and experience as an attorney.”

On a personal level, Young said she has valued Rotter’s help and guidance in a variety of ways over the years, particularly when it comes to child-rearing and in running an effective political campaign.

“Since we were both working women, I’ve turned to her for advice on many occasions when it came to providing care for my children,” Young said of Rotter. “I remember picking her brain about the most important criteria for choosing a good pre-school and her answer was, ‘Do they pick up and deliver?’ She is always ready with a quip or a good line.”

She may have learned a few from her dear friend Hilda Gage, the widely respected Michigan Court of Appeals judge who died of complications from Multiple Sclerosis in 2010. Gage, according to Rotter, was a “trailblazer” for women in the law, serving as the first female president of the Michigan Judges Association and the first woman chair of the Judicial Tenure Commission.

Gage enjoyed a “very special friendship” with Rotter, Judge Young, and Michelle Engler, Michigan’s former First Lady. The four often traveled together and they particularly relished the opportunity to visit on Mackinac Island, according to Mrs. Engler.

“The first time I met Harriet was shortly after I moved to Michigan in 1990,” said Engler, a graduate of the University of Texas Law School. “She organized a luncheon to introduce me to a number of other women attorneys and judges in Michigan. It was such a thoughtful gesture because it recognized me not only as the new First Lady, but as a professional in my own right. She, Joan, Hilda and I became fast friends, and spent a lot of time together after that.

“We used to have girlfriend weekends at the Governor’s Summer Residence on Mackinac Island,” Engler related. “The topics ranged from politics (of course), to husbands and children, to their stories of being the only women in their law school classes and their participation in marches in support of the ERA movement. After my daughters were born, the girls came to know and adore Harriet and her ‘gang.’ They always wanted to put on plays for the women, and once when Harriet was leaving the Island, Madeleine (about 3 at the time) told her: ‘But we’ll be so lonely without you!’”

In fact, said Engler with a smile, “We had dreams of one of my girls marrying one of her grandsons (Jake, Max, Daniel, and Mitchell),” a fanciful notion that someday could be fulfilled if wishes do indeed come true.

In the meantime, Engler will be content to treasure another story about Rotter.

“When John was contemplating his first run for Governor, one early visit was with Harriet to ask for her support,” Engler recalled. “She was always a ‘go-to’ person in Oakland County for Republican candidates. She has amazing connections and broad influence not only in the legal community and among professional women, but also within the Jewish community as well.

“In recognition of her talents and contributions, President (George W.) Bush appointed Harriet to the Kennedy Center Board and Speaker Denny Hastert (appointed her) to the U.S. Commission for the Preservation of America’s Heritage Abroad. These appointments were a recognition of Harriet’s involvement.

“Harriet has always been a great role model because she has been willing and eager to mentor and promote young women lawyers and professionals,” said Engler. “This has always impressed me, since my experience as a young associate with the few female partners in my law firm was not the same.”

As the first woman president of the Michigan Chapter of the American Academy of Matrimonial Lawyers, Rotter graduated from Wayne State in 1959 with a degree in history, earning Phi Beta Kappa recognition. She holds a master’s degree in political science and urbanology from Wayne State, and obtained her juris doctor from the University of Detroit.

Her history of volunteer service spans nearly five decades and includes serving on the board of Central Michigan University from 1993-2000. She also served on the board of the John F. Kennedy Center for the Performing Arts from 2002-08, and currently is on the U.S. Commission for the Preservation of America’s Heritage Abroad.

“For all the volunteer work that I have done over my career, the joy that comes in helping has been the greatest reward,” said Rotter. “I encourage every young lawyer, or young person in general, to get involved in politics and charitable works – and to stay involved.”

It’s advice that she has shared with her three sons (David, Michael, and Steve), who were ages 6, 7 and 10 when Rotter enrolled in law school. They are the products of a loving marriage that is in its 57th year.
“My husband and I met when I was 14, we were married when I was 18, and I was teaching at a high school a year later,” said Rotter.

It was her husband, Norman, a retired neurosurgeon, who “encouraged” Rotter to attend law school and to pursue her interest in politics and feminist causes.

“Despite all of the demands of his job and the pressures that go with being a neurosurgeon, he has always been there for me, even though he has zero interest in politics,” said Rotter.

Early on in their marriage, Rotter and her husband came to an “understanding” that has continued to serve them well over the course of their time together. The agreement bears the heading “C.P.,” which is short for “Command Performance.”

“In each of our careers, there are some events each year that you absolutely have to attend – a campaign fund-raiser, the bar association gala, or the dreaded hospital dinner dance,” said Rotter with a smile. “I had mine. He had his. As such, we worked out an agreement that each of us could drag the other to two ‘C.P.s’ a year. After that, if I wanted him to attend an event with me, then we had to do some serious ‘negotiating,’ which could mean that he gets to pick the next three movies we see or the next vacation we’d like to take. The stakes can get high.”